Long before the click and go websites, there were only a handful of brick and mortar shops to offer  ecommerce never mind online appointments and selling hairdressing online. Today we look back at our salon journey and how our e-commerce salons paved the way through the 21st century. Did you know that Alan’s original salon website first went live in 1997 and it was full on! Designed and built by Alan himself the salon website had all important online booking line, told the story of the salon, communicated with the clients through e-zines, advertised stylists jobs and more!

Here are some pictures 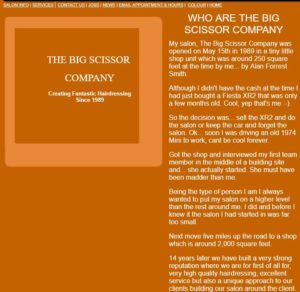 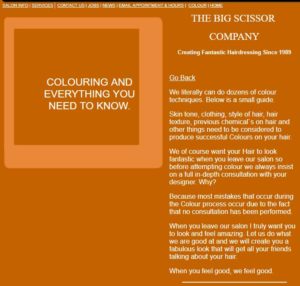 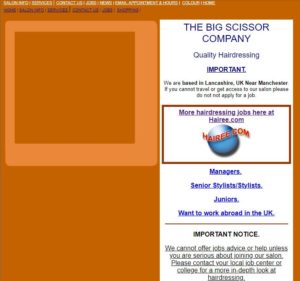 Frustrated by the poor advice from the sales reps and men in grey suits from outside of the salon industry who never owned a shop in their lives, a new website called Hairee.com was born. It was truly a voice of the hair industry, rebellious, against the rules, in fact, Alan even became a WANTED man for exposing certain industry BS! 😉 Just as it shows in the picture!

Like today, the website had e-shop packed with books, manuals, and really helpful salon management tips and hey it even had a flashy, rolling banner going across, cool or not! 😉

Also, the proof of who was the original creator of The Salon Column Builder and the SuperStylists long before they became ripped off and copied a thousand times over 😉 Now sometime in the year 2007, Alan lost the domain 🙁 and the guy who got hold of hairee.com domain wanted a LOT of money
for it :). Undeterred by the challenge, a new website, even punkier and cooler has emerged, long live www.salonpunk.com.

It started in Latvia, swept away through the all corners of the United Kingdom, Ireland, New Zealand, Australia, Malaysia, Singapore, The United States in fact, 6x around the world mentoring, teaching and training a new generation of salons.

Here are some of the original shots from our graveyard of salon bootcamps! With today’s click and go high-resolution selfies and check me in and Like me, Unlike me world, it’s easy to forget the humble beginnings of the online world for the brick and mortar salons in particular. Although they looked simplistic, they have all paved the way to today’s exciting e-commerce of today. So RIP our salon websites, you have paved a way for a new generation of websiters.

Do you have your salon graveyard that is now resting in peace? Share them with us, we’d love to see how far you’ve come 😉

Yours in hair salon success